It's a Matter of Conscience: Godly Responses to December 25th

A Best-Practice Principle
Last week we began discussing some of the controversies surrounding December 25th and how we, as Believers, can stop merely REACTING to the negative origins of Christmas and begin making wise RESPONSES to this season.

We are offering at least Five Godly Responses to December 25th.

Last week we presented response #1: Become All Things to All Men, according to 1 Corinthians 9:18-23.

In his first letter to the church in Corinth, Paul was dealing with a matter that was very similar to the controversial Christmas issues. Some Believers were participating in the practice of eating food that was offered to idols. They didn’t feel restricted because they knew that the idols were not real gods and they also knew that what goes into a person is not what defiles them.

It’s the same for Christian Believers today who participate in modern Christmas rituals that have proven historical foundation in idol worship. They feel, just as those early Believers, that they are free in Christ Jesus. Therefore, they have no problem with the negative origins.

However, Paul admonished those early Believers to not allow their freedom to cause another brother to stumble. He explained that due to his brother's conscience, he did not have internal permission to participate in that practice of eating food offered to idols.

If another Believer is struggling with our practices, it may wound their conscience. Paul actually says that we sin against our brother and Christ. The sin is not the practice itself, but it is in how the participation affects our brothers.

Let’s read the letter: “Therefore concerning the eating of things offered to idols, we know that an idol is nothing in the world, and that there is no other God but one. For even if there are so-called gods, whether in heaven or on earth (as there are many gods and many lords), yet for us there is one God, the Father, of whom are all things, and we for Him; and one Lord Jesus Christ, through whom are all things, and through whom we live.

However, there is not in everyone that knowledge; for some, with consciousness of the idol, until now eat it as a thing offered to an idol; and their conscience, being weak, is defiled. But food does not commend us to God; for neither if we eat are we the better, nor if we do not eat are we the worse.

But beware lest somehow this liberty of yours become a stumbling block to those who are weak. For if anyone sees you who have knowledge eating in an idol’s temple, will not the conscience of him who is weak be emboldened to eat those things offered to idols? And because of your knowledge shall the weak brother perish, for whom Christ died? But when you thus sin against the brethren, and wound their weak conscience, you sin against Christ. Therefore, if food makes my brother stumble, I will never again eat meat, lest I make my brother stumble.”

We realize that even though there are many things that are okay for Chris and Carol to do, as Christian life coaches and spiritual leaders in this community, they are not always expedient. Some things are not wise for us to do. Some things are not beneficial for us to do. There are many things that we were at liberty to say and do in Missouri that have proven to be offensive in Pennsylvania. So we don't do them for the sake of our brothers and sisters in this region and culture.

Why abstain? Well, because we have an extremely important mission and purpose for being in Harrisburg. Some of our freedoms could go beyond merely offending another brother, and could actually cause them to stumble. Paul says that some of our freedoms could actually wound another brother’s conscience. Our freedoms can cause others, who are outside of the Faith, to continue in their ungodly practices. So, we have learned that some things are just not worth it. Why risk losing potential brothers and sisters or wounding current brothers and sisters?

What are we saying to you today? We're saying, please be very careful of what you practice in this controversial season. Allow the Holy Spirit to give you the 'yea and nay' about what you do. Don't question Him. Just obey Him.

We cannot, do not, must not, and will not dictate what goes on in your home. We’re not the Christian Christmas police! God knows who is in your family and He knows the people who are part of your life. You might be connected to people with whom your response is based upon what we mentioned last week ….I have become, to those who are without law, as without law.

Most of today’s Christmas practices don’t cause people any internal conflict because they have no knowledge of the history. But if you are closely connected with Believing family members who have issues with these things, be very wise and sensitive to where they are in their conscience. They would require the response from last week's scripture .…I become to those who are under the law, as under the law.

Remember, a person’s beliefs are often deeply rooted in teachings, upbringing, history and life-long understandings. It really is a matter of their conscience. Don’t force someone to violate their own conscience. It’s not simply a matter of whether THEY are right or wrong about Christmas. Don’t let your freedom cause your brother to stumble.

Enjoy the holiday, enjoy your family!


Chris and Carol Green have been called under-the-radar leaders in rebuilding, restoring and renewing hearts and homes. The Greens are certified professional life coaches who founded C and C Connections, LLC, a coaching and consulting business that specializes in equipping leaders in the principles of CARE (Compassionate Awareness with Respect and Empathy); and the Fruitful Life Learning Community, a unique merging of a life-development church with home groups, house churches, ministers and outreach ministries. 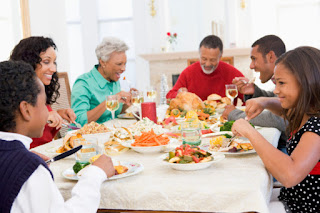 It’s that time again. It’s the holiday season. Americans are still be trying to make time for family, fellowship, food and festivities.
Now that Thanksgiving is upon us we're going to start talking about December 25th. That's because, the day after Thanksgiving is the traditional start of the holiday shopping season. Therefore, we're going to take advantage of this annual launch to start talking about December 25th and what it truly means in America today.
Did you know that many people feel that Christmas should not be celebrated?
When you learn about some of its history you can understand why. Here are just a few reasons why it is not celebrated in many sectors of American society. You might have family or friends who feel this way:
We agree that these are all very strong arguments for not participating in the festivities of the holiday. Many preachers across America will accurately and systematically destroy any reason a Christian Believer could possibly be connected to this season of the year.
However, as you know, we have built a reputation on diving into controversial topics and we’re about to add more fuel to that fire.
Many Christians and religious people have taken the position that it is wrong to embrace things that were perverted and sinful in their origins. They feel we should never attempt to use these things for God.
However, that's exactly what God did with us. Even though we were born in sin and shaped in iniquity, Christ died for us while we were still sinners. For anyone who receives Him, He gives them the power to become children of God. He changes us and sets us apart for His purpose. He didn't allow our sinful origins to keep us away from His divine purpose.
Now, as His children, we have the opportunity to take advantage of a season that has very negative origins and highly commercialized, money-making schemes. This is one of the special times in which our families can be exposed to the reality of Jesus Christ and the true reason why He came to earth.
We believe that we must do much more than just debate about all the reasons why we should not celebrate Christmas. Most people simply REACT to the negative aspects of Christmas. We believe that we need to provide Believers Godly ways to RESPOND to this season.
Beginning this week, and up until Christmas Day, we want to give you Five Godly Responses to the Pagan Origins of December 25th.
This week we’re presenting response #1:
Become All Things to All Men.
In 1 Corinthians 9:18-23, Paul writes, "For though I am free from all men, I have made myself a servant to all, that I might win the more; and to the Jews I became as a Jew, that I might win Jews; to those who are under the law, as under the law, that I might win those who are under the law; to those who are without law, as without law (not being without law toward God, but under law toward Christ), that I might win those who are without law; to the weak I became as weak, that I might win the weak. I have become all things to all men, that I might by all means save some. Now this I do for the gospel’s sake, that I may be partaker of it with you."
We see the Christmas season as the perfect opportunity to connect with many different kinds of people. This scripture does not mean that we become hypocrites and pretenders in order to indulge in secular practices. This is talking about connecting with people ON THEIR LEVEL of understanding. This is about identifying with them, the same way Christ identified with all of mankind.
Don't shun people because of what they believe or practice during this season. Don't isolate yourself from the office party or the family gathering because they may have traditions or rituals that are against your beliefs. Become all things to all men, so that you might by all means save some.
We'll give you a week to ponder over these thoughts! Please watch for next week's posting as we provide another way to avoid merely REACTING to, but instead, wisely RESPONDING to the pagan origins of December 25th.